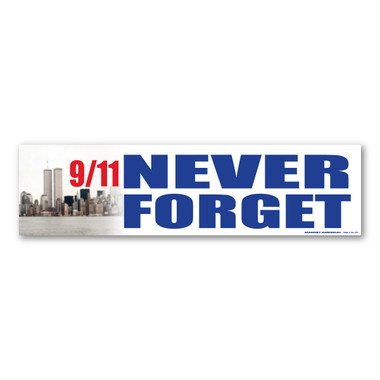 On September 11, 2001, the United States of America suffered four terrorist attacks. Two attacks hit the North and South towers of the World Trade Center, causing damage not only to the complex, but to ten additional nearby structures. A third attack hit and destroyed the western side of the Pentagon. The fourth attack was directed at Washington, D. C., however, after passenger intervention, it was crashed into a field in Stonycreek Township, PA. 2,996 lives were lost and over 6,000 others were injured. This Bumper Strip Magnet is to honor the memory of those lost and to show that we will never forget.