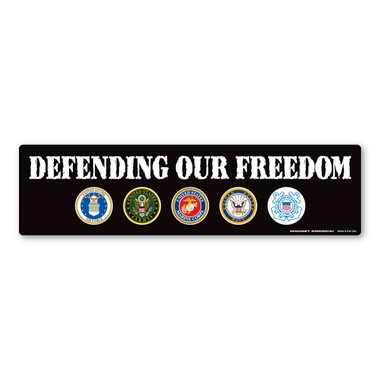 While the 5 branches of the U.S. Armed Forces were founded at different times, the origin can be traced to 1775, during the Revolutionary War, when the Continental Army, Navy, and Marines were formed. In 1790, the Revenue Cutter Service was formed and, in 1915, combined forces with the United States Life-Saving Service to create the Coast Guard. In 1907, the Aeronautical Division, U.S. Signal Corps was established by the Army and would later become its own branch, the U.S. Air Force. The men and women in these branches work every day to defend our freedom. This Bumper Strip Magnet can be used to show your support and appreciation for all branches of the military and your pride in our country.