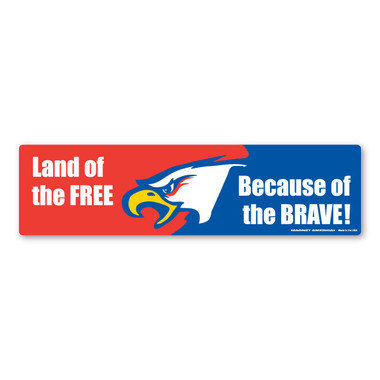 Land of the FREE Because of the BRAVE! Bumper Strip Magnet

Using a variation of the lyrics to the Star-Spangled Banner, this Bumper Strip Magnet serves as a reminder that we are the Land of the Free because of the brave men and women serving the country that they also call home. The Star-Spangled Banner was written in September, 1814 by Francis Scott Key. Inspired by the sight of the American Flag flying victoriously over Fort Covington at the Battle of Baltimore, Key partially penned the lyrics while he was imprisoned by the British after an attempted exchange of prisoners. He completed the poem after his release a few days later. It became the National Anthem on March 3rd, 1931. Use this Bumper Strip Magnet to show not only support for our troops, but pride in our country.