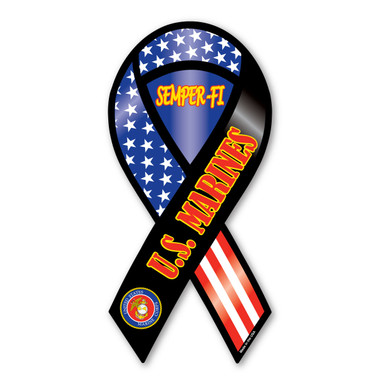 In 1775, the Marine Corps was formed as the Continental Marines. They were specifically established to serve as an infantry branch that was able to engage in combat both on land and at sea during the American Revolutionary War. Today, members of the Marine Corps work closely with the Navy as well as the Army and the Air Force, gaining nicknames such as "America's third Air Force" and "America's second land Army." The Semper Fi U.S. Marines 2-in-1 Large Ribbon Magnet includes the Marine motto, "Semper-Fi," from the Latin "semper fidelis," meaning "always faithful." This magnet can be used by former and current Marines to show pride in their branch, by others to show support, and to remind all of the faithful service that the USMC provides to our country.