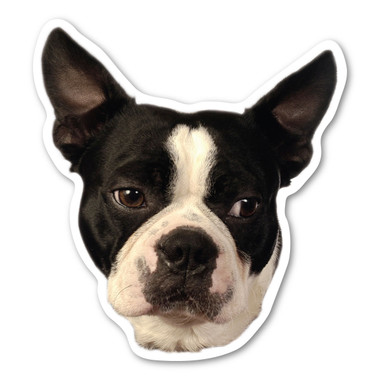 If you are a dog owner, you know just how much joy and love these animals can bring to your life. They are one of the most loyal creatures and it is no wonder that they are called “Man’s best friend.” Among the many breeds is the Boston Terrier. The Boston Terrier was the first U.S. breed to be recognized by the American Kennel Club, was America’s first non-sporting breed, and is one of the few dogs to be bred on American soil. These dogs are likely descended from Robert C. Hooper’s dog, Judge and, despite the name, are not considered terriers by the American Kennel Club. While originally bred as fight dogs, Boston Terriers are now companion dogs with outgoing and charming personalities. This, combined with their tuxedo-like markings has earned them the nickname “American Gentleman.” Despite a tendency to be territorial, properly socialized Boston Terriers do well in homes with children and other pets. This Boston Terrier Magnet is a great way to show that you own one of these fantastic creatures!