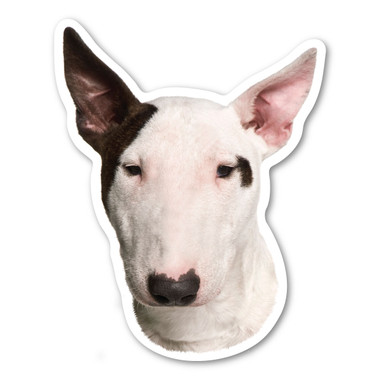 If you are a dog owner, you know just how much joy and love these animals can bring to your life. They are one of the most loyal creatures and it is no wonder that they are called “Man’s best friend.” Among the many breeds is the Bull Terrier. The breeding of these dogs began in the early 19th century in an attempt to create better fighting dogs. Mixing the Old English Bulldog with Old English Terriers resulted in an early form of Bull Terrier. In the mid-19th Century, James Hinks sought to breed a bull terrier with a more elegant appearance and a gentler temperament. The result was a success, as the modern Bull Terrier has a loving attitude similar to a Golden Retriever. They can be stubborn, but are overall referred to as a good family dog and like other dogs, are quite docile as long as they are not provoked. This Bull Terrier Magnet is a great way to show that you own one of these magnificent creatures!