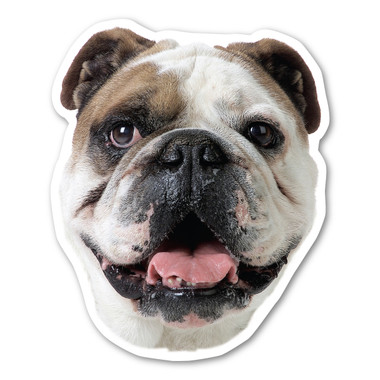 If you are a dog owner, you know just how much joy and love these animals can bring to your life. They are one of the most loyal creatures and it is no wonder that they are called “Man’s best friend.” Among the many breeds is the Bulldog. These dogs are one of the most well-known, being used as mascots for the British Navy, the US Marines, and around 32 American universities. It is also used as a symbol of British Culture. They have been around at least since the 1500s, and were originally used in bull and bear baiting. Because of this, the early version of the breed was quite aggressive. However, after the Cruelty to Animals Act of 1835, bull and bear bating became illegal. Today, breeders have worked hard to help the Bulldog have a gentle temperament, The modern breed, while stubborn, is friendly, patient, and tends to form strong bonds with children. These dogs have certainly come a long way, and if you are a proud owner, this Bulldog Magnet is a great way to show it!