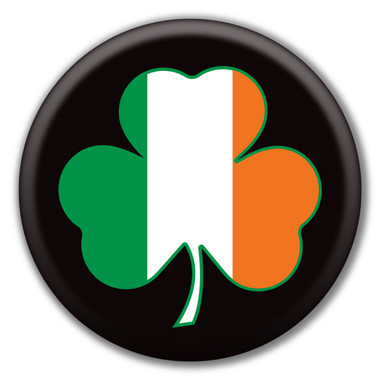 Saint Patrick's Day first began in the 17th century as a religious feast in honor of Saint Patrick and his introduction of Christianity to Ireland. Today, it is the most widely celebrated national festival in the world, particularly by North Americans of Irish descent. Celebrations include parades, music sessions, festivals, and, most commonly, "wearing of the green." In Ireland, the week of Saint Patrick's Day is known as "Irish Language Week," during which people will make an effort to use the Irish language. This Shamrock Button displays the colors of the Irish flag green, white and orange. The green symbolizes older Gaelic tradition, while the orange symbolizes the supporters of William the Orange. The white indicates a lasting truce between the Green and the Orange. It can be bought as a refrigerator magnet, a pin, or a magnetic badge. It also makes a great item for Saint Patrick's Day parties.